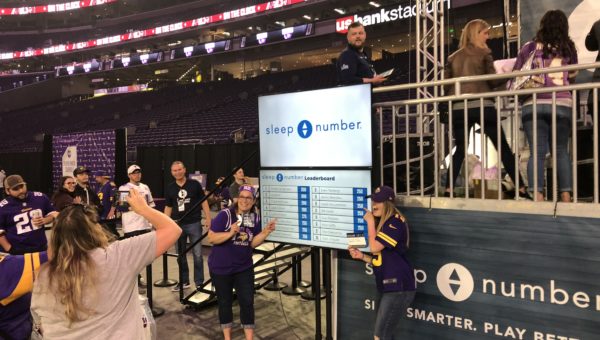 We threw a Draft Day party with Sleep Number and the Minnesota Vikings!

SKOL!! We teamed up with the Official Sleep + Wellness Partner of the NFL for the Minnesota Vikings Draft Day Party inside U.S. Bank Stadium! Over the course of the night,  Vikings fans competed for a chance to win a new Sleep Number mattress, while brand ambassadors handed out coupons and Sleep Number-branded gear. As fans eagerly awaited their team’s draft picks, Sleep Number provided the entertainment, giving fans the opportunity to compete against one another in a battle of pillow-tossing prowess.

Use our game customizer to design the perfect experience for your brand, audience, and venue.

The Toss Up Deck

Get the rundown on our services and capabilities in our PDF deck you can review later or share with your team.

Looking for Stand Up Stations?

Toss Up Events is temporarily on hold as we focus on supporting the community with Stand Up Stations.